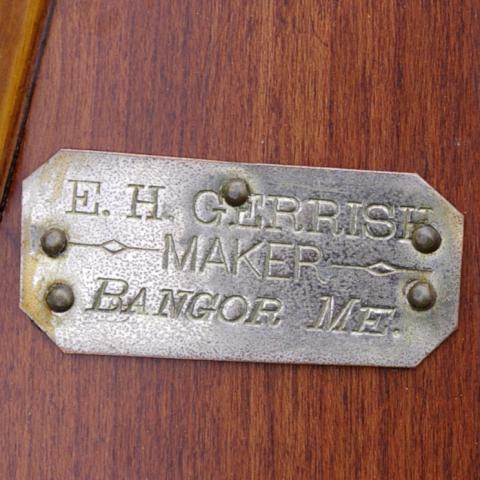 Evan H. Gerrish may have been the first person to sell wood and canvas canoes commercially. From 1882-1909, he built and sold canoes from a shop in Bangor, Maine. Some of his canoes contain elements of the birch bark canoes upon which they were based. If studied from earliest-to-latest, Gerrish canoes appear to show the morphing of the wood-canvas from its roots in the birch bark to the modern open gunwale canoe.

Gerrish canoes appear to vary, one from the other, as though the builder was continually refining his product. Typical of his earlier canoes, the rails extend beyond the stems and are wrapped with cane to simulate the spruce-root of a bark canoe. Likewise, seats and/or thwarts may be mortised into the rails, as is typical of a native-built birch bark canoe. Seat frames and reed-weaving are distinctive and seen on early as well as post-1900 Gerrish canoes, which tend to have a more "modern" appearance. An open gunwale Gerrish may include the addition of a decorative half-round on top of the inwale and outwale. Wood species used on decks, thwarts, and seat frames may be American chestnut.

Deck:  Commonly a narrow heart-shape, but seen on canoes assumed to be later is a concave curve with or without coaming.

The hardwood stem is splayed similar to the Morris stems however the bottom of the stem is 1.125" to 1.25" wide tapered to .875". The taper starts at the first full rib and extends to the end of the stem at the fourth or fifth full rib.

Most double ended canoes would have hand thwarts just behind both decks.

Name Plate: metal plate affixed to bow deck stating E.H. Gerrish/Maker/Bangor ME
(Also seen is the above wording stenciled on the canoe's planking)