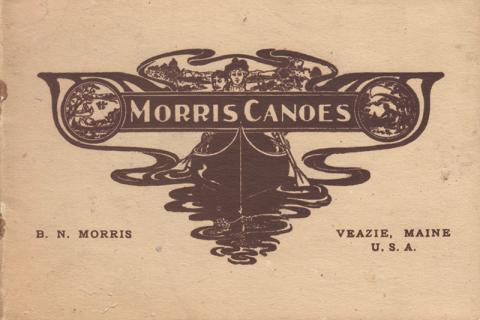 The B.N. Morris Company of Veazie, Maine, was in business for approximately thirty-years. Charles and Bert Morris began building canoes in the barn attached to the family home and a separate shop behind this building and began selling them commercially from 1891. Eventually, the B.N. Morris Company maintained a factory with many buildings, selling their “first quality” B.N. Morris canoes through dealerships in many countries and a less-expensive Veazie Canoe Company canoe factory-direct.

It isn’t known what became of the B.N. Morris Company records. They may have been lost in the fire or were destroyed at a later time, or they may eventually turn up. Although it isn’t possible to tie a Morris serial number to original build information, details ascertained from existing Morris canoes have produced a theory permitting us to suggest a build-date.

A fire, described in the Bangor Daily News as “… very spectacular, lighting up the country for miles around”, destroyed the B.N. Morris factory in Veazie, Maine, the evening of Monday, December 15, 1919. Articles from the Bangor Daily News and the Bangor Daily Commercial contain interesting accounts of the fire. The articles contradict each other in regard to the possible location of the fire’s start and the extent of loss. Both articles assure the public that the factory would be rebuilt, but it was not.

Keels- Not all, but most Morris canoes had full length keels. Keels were fastened with #8 bronze screws at every rib instead of the much more common fastening at every other rib.

There are only three known Morris canoes with a metal name plate, and they are considered to date from the early 1890s. It would seem Morris replaced use of the metal plate with a decal, possibly as a cost-saving measure. In general, the decal came into use in the United States in the mid-1890s, and Morris may have begun using the first of his decal-types at this time.

Version #1 is found on three canoes, which appear never to have had a serial number.

A simple version is found on the coaming of long-decked canoes and on some Morris accessories:

Morris decals with the word "rowing" came into being before the Morris Company was building any canoes with motors. In approximately 1910, Morris was producing a motor canoe and the decal was changed to reflect this. Since far fewer canoes were rowed than were paddled, it probably seemed more reasonable to eliminate "rowing" and substitute "motor".

We can't say with absolute certainty that no "rowing" decals were used after the "motor" ones arrived, so a canoe from this "transition period" of around 1912 could have either decal. What we do know is that Morris 10090 has a heart-shaped deck with a decal that has the "motor" wording, and this is the lowest serial number with a "motor" decal. This canoe is circa 1912-13, according to current theory.

References
Filed Under:
B. N. Morris